Root beer has its roots in small beer. Small beer was about 2% alcohol. It acted as a preservative. The small beers were made from the small bits of sugar left in the grains or made with small amounts of grain or lastly it was drunk early before fermentation was complete. You can make root beer at home or for a great science project learning about fermentation. 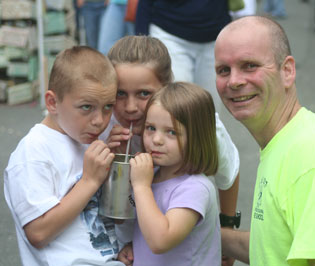 Birch beer is a carbonated drink made from birch bark. It is a favorite in New England. In the CT area, we tend to drink white birch and in PA they prefer a red birch. The color depends on the species of birch tree from which the sap is extracted. After the sap is collected, it is distilled to make birch oil. The oil is added to the carbonated water. Black birch is the most common extract. Birch beer is similar to root beer, but yet very distinct. It is sweeter with a sharper flavor, and has almost a slight hint of mint.

Back to the colonists as they settled in America – the pioneers built homes and of course they baked bread, made corn pudding and brewed beer. Not having what they missed from Europe they used what they had – . They used sweeteners such as honey, molasses and cane sugar. They found plants to provide the bitterness and flavor. They used sarsaparilla root, ginger root, wild cheery bark, vanilla bean. As a result we have old fashion soda, Birch beer, Sarsaparilla, Root Beer and Vanilla Soda – today called cream soda, and Black Cherry.